The meeting saw the inaugural Tea Tree Golf Club committee elected (see table below) which included a mix of Members (gentlemen) and Associates (ladies). The Golf Club committee continued this way until the Kingston Beach constitution was adopted in the early 1930's and then came under the standard regulations.

Prior to the April meeting Mr Scott had spent considerable time investigating a suitable location for the proposed Tea Tree Golf Club course. Mr and Mrs R.C. Thompson of 'Summerville', Brighton, kindly agreed to lease land to the Tea Tree Golf Club from the corner of Back Tea Tree Road for one shilling a year. The links remained here until 1982.

The links were originally pegged out by Mr Robert Nettlefold, Mr Jock Robertson (Kingston Beach professional) and Miss Betty Sale (The Tasmanian Ladies Golf Champion at the time). Initially Tea Tree Golf Club members were handicapped off 72 bogey, with a limit handicap of 36; Associates having a limit handicap of 54.

During the Depression (1929-32) money was scarce,so initially the work conducted to create and maintain the links and clubhouse was done on a voluntary basis, carried out by working bees. It was a mighty job to get the links in playing order. There were acres of tussocks, sags, bushes, honeysuckle trees and rushes. There was no water laid on and no modern machinery to assist preparing and maintaining the course.

On each tee (for both Members and Associates) there was a box containing two kerosene tins, one filled with water to wash the ball, and the other filled with sand to tee-up the ball. The modern tee as we know it was not in vogue at this point in time.

It wasn't until about 1932 that the Tea Tree Golf Club appointed it's first green keeper for a fee of 5/- (5 shillings) per week. Every Friday the green keeper would cut and roll the greens with an old hand-mower and a small cement roller pulled behind a pony and spring dray. Prior to this appointment the up-keep of individual greens were allocated to certain member families(see table right).

Tea Tree Golf Club competitions commenced in about April each year so as not to clash with the cricket and other sporting commitments of members. Competitions never started before 12.45pm, as Saturday morning work was the norm at the time. It was also the custom for many years that 9-holes were played, then all players stopped for afternoon tea, before returning to the course to finish the last 9-holes. Many golf professionals visited the links offering lessons at an average charge of 6/- (6 shillings) per hour.

Sunday golf was prohibited at Tea Tree Golf Club for many years due to an early stipulation laid down by the land owners. Liquor was also not permitted, and it was not until about 1947 that the first 5 gallon keg appeared, and then only in the Members dressing room, ladies were definitely not permitted to partake.

In 1932 Tea Tree Golf Club started taking part in inter-club matches. The participating clubs included New Norfolk, Claremont (then a country club), Richmond, Bothwell and Ouse with Huonville joining the competition in 1934. Teams consisted of approximately 9 Members and 9 Associates who all played together at the one time.

In 1937 Tea Tree Golf Club joined other clubs to form the Southern Country Golf Association. This saw the commencement of the Country Pennant Golf Competition. 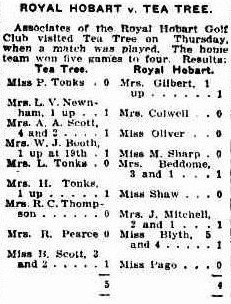 During the war it was decided that the Tea Tree Golf Club would continue to function. The Club played on a restricted basis, having competitions fortnightly catering for approximately 10-12 players. The match fees of 6d (sixpence) per head were donated to the Red Cross

With the war over, the Tea Tree Golf Club eventually got back to normal operation.

For some years there was discussion of laying-on water to the greens, but the cost always appeared out of reach. At the 1955 Annual Meeting the matter was raised again and following investigation it was decided that the water would be pumped by electric pressure pump from a water hole in the Strathallan Rivulet near the 'Maiden Erleigh' homestead, some 3/4 of a mile away. The estimated cost was £1,200, for which a loan would be required.

The proposal was to be finalised at the monthly meeting in July 1955. The President, Mr Thompson, was unable to attend the meeting due to illness but sent word that he gladly gave his consent for the project to proceed. The committee decided to go ahead with the project, but a few days later Mr Thompson passed away suddenly. The tragedy caused great sorrow and sadness and thoughts of the water supply were set aside.

By the end of the year, it was learned that the Southern Regional Water Supply Pipeline was to go through the Tea Tree Golf Club links. This did eventuate and the result was that the water was laid on to every green as well as the clubhouse at the cost of £160, which was indeed fortunate.

In 1965 a proposition came before the committee that the club should move to a site on the Brighton-Old Beach Road on the property of 'Prospect', owned by Club members H. J. and B. J. Skeggs. The land was considered suitable for 18 holes, the layout was good, there was excellent turf and plenty of water. The committee gave much attention and consideration to the matter, but as the price of the property was $50,000, plus the cost of development, it was finally decided against the move.

Some time after this the 'Summerville' estate was divided, and the golf links came into the possession of Mr. James Thompson. He intimated that he wished to develop an irrigation scheme, which would need a large dam. This would take in some of the links, including a portion then played on. Mr Thompson was happy for the links to remain and be redesigned around the new dam. The course was redesigned to maintain approximately the same distances as the previous design.

Since a decision on the 12th of November 1991 ladies have been admitted to the Tea Tree Golf Club as full members.

The first Clubhouse consisted of one large room, facing west across the corner of Back Tea Tree Road and the Main Road. It had a let-down window on wooden hinges, which also served as a table. A fireplace at one end provided warmth after a round. Two wooden toilets were erected behind the building, and a wooden stile was built astride the fence for access convenience.

In 1932 the clubhouse was moved to a location close to what would later become the 5th tee. It remained there for some 30 years before being dismantled in 1962. The clubhouse, whilst being extended on several occasions, was in keeping with the average country golf clubhouse of the times. There was no electricity connection, a wood stove for cooking and the only lights used for night meetings were kerosene lamps, lanterns and even candles on occasions.

At the 1961 Annual General Meeting Mrs R. C. Thompson offered a donation towards building a new clubhouse to revive dwindling membership interest in the club, other members and associates offered support. The Club engaged the late Mr. Harold Paice of Bridgewater to build the clubhouse. By September 1961 the clubhouse was ready for use, and a Grand Opening Day was held.

At this time the game of golf was being given a boost with TV coverage. Club membership went up and the committee decided to take advantage of the requests by non-members wishing to pay green fee charges of 4/- (4 shillings) for a round of golf. In one year one pound per day (£365) was collected this way.

The Club Moves to a New Location

In 1978, after 51 years of continuous usage, Mr James Thompson intimated that he wished to terminate the lease of the land occupied by the Club. The fine gesture of the Thompson family in leasing the course for so long for a nominal rent was much appreciated by the Club. In Lieu of the lease Mr Thompson offered to sell the Club some 30 hectares of land directly behind the Pontville township. The Club accepted the offer.

The land had an excellent water supply, in addition to being connected to the Southern Regional Water Supply, it was also served by the Bagdad and Strathallan Rivulets. A new clubhouse was erected and a new golf course was laid out by a dedicated committee set up for that purpose. In 1982 the Minister for Local Government, The Hon. Ian Braid declared the new clubhouse and golf course officially opened. The club continues to occupy this site.